In June 1977, Reps. Frank Horton of New York and Norman Y. Mineta of California introduced a House resolution to proclaim the first ten days of May as Asian-Pacific American Heritage week. The following month, Senators Daniel K. Inouye and Spark Matsunaga from Hawaii introduced a similar bill in the Senate. Both were passed and on October 5, 1978, President Jimmy Carter signed a Joint Resolution designating the annual celebration.

In 1990, President George H. W. Bush signed a bill passed by Congress to extend the week-long celebration to a month-long celebration. In 1992, the official designation of May as Asian-Pacific American Heritage Month was signed into law.

About Erin Yun Author of Pippa Park Raises Her Game

In her latest blog, author Erin Yun opens up on why she wrote this Korean American story for kids and how the recent Asian Pacific American Heritage Month! conversation about the lack of diverse Asian voices mirrors her own experience as a young reader

Erin Yun grew up in Frisco, Texas. She received her BFA in English from New York University and served as president of its policy debate team. This experience came in handy when she became the debate consultant for the Tony-nominated Best Play on Broadway―What the Constitution Means to Me. Erin is a member of the Society of Children’s Book Writers and Illustrators and has written reviews and articles for BookBrowse. She developed her author program, an interactive writing workshop, which she has conducted in person and virtually at schools, libraries, and bookstores. She currently lives in New York City, and yes―she used to play basketball as a middle grader! 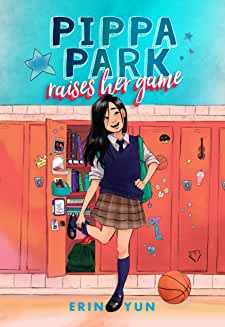 As a kid, I was a voracious reader. Fantasy, realistic fiction, thrillers, mysteries, I read them all. Each week, I would beg my parents to take me to the local library, and each time I would leave with a stack of books almost as tall as me. Despite this, it wasn’t until college that I found books with Korean protagonists. I had moved into a wider pool of novels, adding translations and adult literature to the mix. When I was younger, I just didn’t see that many middle-grade or young adult books with Korean leads.
According to an infographic from Sarah Park Dahlen in a School Library Journal article1, only 3.3% of children’s literature depicted Asian characters in 2015. Books featuring all people of color combined only made up 15%. In 2018, the number of books with Asian representation grew to 7%. Even with that increase, children’s books about white characters were still 50% of the pool. The number of books revolving around animal characters had a greater percentage than all books featuring a nonwhite character. In addition, these numbers only speak to the quanitity of representation, not the quality.

I think about these statistics often. I’m half-Korean and half-white. When I wrote books as a kid, some of the stories had white protagonists and some had Asian ones, but I didn’t think too much about it. It wasn’t until I started reading more books with Korean characters as an adult that I realized what a literary lack there had been in my childhood. Every time I read a new book about a Korean character, I got excited all over again because there were so many tiny details I could connect with—from the food to pop culture references to hearing characters speak Korean. When I wrote Pippa Park Raises Her Game, I knew that I wanted the main character to be Korean because I knew a younger version of myself would have appreciated it and because all children deserve to see themselves represented in the literature they read.

Increasing diversity in children’s publishing is a momentous task, and there is a lot of work ahead of us. The sky is the limit in terms of increasing the number of diverse books that exist. But I find glimpses of hope when reading recent children’s books with Korean characters. I look at my bookshelf now and see novels I would have snapped up as a kid like Jessica Kim’s Stand Up, Yumi Chung! and Linda Sue Park’s Prairie Lotus. I hope my reading list only grows as the number of published diverse children’s books grows too.
Pippa Park Raises Her Game for Asian Pacific American Heritage Month is now available paperback is being released on April 13, 2021.
Source:

Discreetly Yours by Stephen Murry

Discreetly Yours by Stephen Murry

The Festival of Storytellers: A Virtual Event for Authors and Booklovers

Where the Crawdads Sing

Wild: From Lost to Found on the Pacific Crest Trail

White Fragility: Why It’s So Hard for White People to Talk About Racism

Besty Books is an online store where you can find the best Amazon products.

We know that it is hard to find the awesome products on Amazon that suits your needs best. You spend hours if not days researching your desired product on Amazon but none fits your needs. We are here to help you.